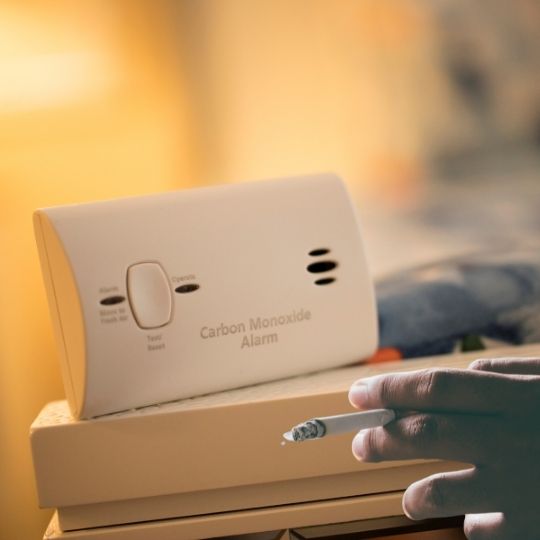 We often see movie characters holding up a cigarette to trigger a smoke or fire alarm and escape, but does this work in real life and with a carbon monoxide detector?

While it’s true that carbon monoxide is one of the gasses cigarette smoke can produce, it’s usually not enough to activate a high CO alarm. You may see a short and rapid rise on the carbon monoxide reading, but it will quickly return to normal as soon as the cigarette is put out.

A carbon monoxide detector is a device that can warn users against high levels of CO. It’s an alarm that can prevent carbon monoxide poisoning and is often paired with other detectors, like that of gas or smoke.

To warn against dangerous carbon dioxide concentrations, they will sound an alarm and display a reading for the viewer to see. The technology behind a detector is that a biomimetic sensor is used- the gel absorbs CO and changes color which sets off the alarm. Other CO alarms use an electrochemical sensor or a metal oxide semiconductor to do the same thing.

To understand cigarette smoke you must look at its individual components. Tobacco, when burned, gives off a myriad of chemicals (more than 7,000 to be exact). Around 250 of them are harmful to one’s health, and this includes ammonia, hydrogen cyanide and carbon monoxide.

So while smoking a cigarette can potentially set off a carbon monoxide detector, it doesn’t always do so. Remember, cigarettes contain a whole lot of other chemicals, and there’s usually not enough carbon monoxide to raise CO levels unless it’s in an enclosed area and a surreptitious amount of cigarettes are smoked.

Other appliances, such as the stove, furnace or water heater have a greater chance to produce large amounts of carbon monoxide which is exactly what a carbon monoxide detector is for. Also, you’ll be better off using a smoke detector or a specialized kind of device that can detect cigarette smoke if you’re worried about tobacco’s harmful effects.

Is a Carbon Monoxide Detector or Smoke Detector Better for Cigarettes?

The answer on which detector is better depends on what kind of smoke or gas you wish to find.

A carbon monoxide detector is best used in households where there are heating devices. It can warn inhabitants and family members that there are dangerous levels of CO and that they should immediately vacate their homes. It can also protect against a car that’s been left running in the garage.

Most residential homes install a combination of CO alarm and gas leak detector to stop common occurrences of carbon monoxide and gas leak poisoning. You can add a smoke detector to the mix as well.