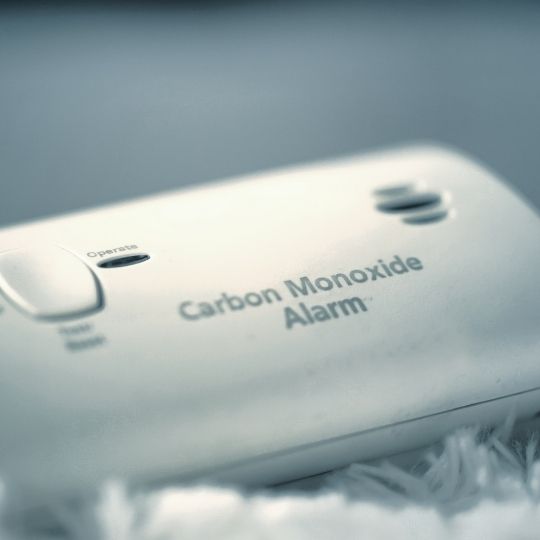 Carbon monoxide as a gas is a bit lighter than air, but it doesn’t really rise or fall in the atmosphere. Unlike smoke, CO mixes in with air and diffuses itself around the room. That said, carbon monoxide does not transfer high or low but rather combines with the air we breathe.

How Does Carbon Monoxide Travel Through The Air?

Carbon monoxide shares some similarities with air- it has a slightly larger molecular weight and about the same density as our atmosphere.

In a typical household the activity of carbon monoxide is neutral, which means that it doesn’t rise or fall, like smoke. Instead, it mixes in with the air we breathe in an even manner.

Carbon monoxide’s properties make it a dangerous gas to people. It’s odorless and can easily diffuse in a room. The molecules are small enough that they can pass through drywall. Furthermore, only carbon monoxide detectors are able to see if there are dangerous levels of CO in your home.

It’s recommended that you get and install carbon monoxide detectors near furnaces, kitchens and places where CO might leak or appear.

Why Do You Need a Carbon Monoxide Detector in Your Home?

Carbon monoxide poisoning is a common occurrence and termed a silent killer by many health experts.

You wouldn’t know that there are excess levels of carbon monoxide until you start experiencing the symptoms, which include dizziness, nausea, confusion, weakness and headaches, among others. When you start feeling these things, you should immediately get out of the room or house and open the windows to let it out.

Where Should You Place a Carbon Monoxide Detector?

First time CO detector buyers wouldn’t know where they should install their devices. Other than the manufacturer recommendation, there are several methods of how you can place a detector at the right spot.

People often install their carbon monoxide detector low and near flame producing appliances, as well as living spaces. Since CO mixes in with air and doesn’t rise or fall, there’s no correct height on where you should place it.

However, you should think about convenience and location. Carbon monoxide detectors usually require a plug and have readouts that tell you the levels of CO in the area. This means you should place it where you can easily read the display and near a wall plug. That said, a wall is better than a ceiling when it comes to putting up CO detectors.

Carbon monoxide detectors should be installed in sleeping areas where gas appliances installed inside the bedroom and per level including basement and habitable attics.

Also, it shouldn’t be too near fuel-burning appliances such as stoves, heaters and furnaces. The correct distance is somewhere around 15 feet or so from the kitchen, and near bathrooms and places where there’s high levels of humidity.

For homes or families with pets, it’s recommended that the CO alarm device is kept well out of reach.