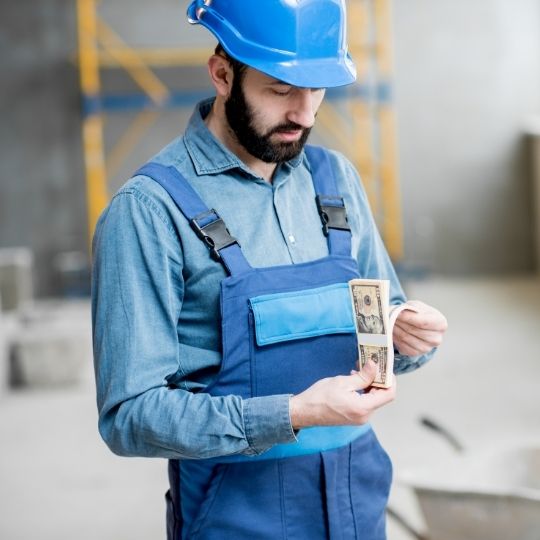 In the United States, there are specific laws regarding how often construction workers must be paid. The Copeland Anti-Kickback Act of 1931 is a labor law for contractors and subcontractors.

Construction workers must get paid weekly for DBA-covered projects according to the United States Government.

In fact, each state may have its own wage laws for construction projects in government. DBA-covered projects are required to be paid weekly, however, that may not be the case for other projects. The SCA, also known as the Service Contract Act, says workers have to be paid wages in a “timely” manner, but a definitive time frame is not mentioned in the SCA.

Each state in the US has slightly different rules regarding payroll details. For example, most states already have a frequency law for payroll. This is also sometimes referred to as the last paycheck law. There are some states which differ on this, such as Texas.

Rhode Island is one of the states that does have a weekly payment roll requirement. This can be waived by each individual state, circumstances depending. A general frequency for wages is outlined in certain states such as Virginia.

For example, according to Virginia law, employers with a business must have regular pay periods and regular pay rates in place for their employees. The only circumstance where this is not required is for executive personnel. Salaried employees have to be paid no less than once a month.

For employees who are paid hourly, that time frame is even less, with the minimum being once every two weeks. Please note that there are some exceptions for each state with details specific to each employer. The best way to ensure your state requires semi-monthly payments is to verify that information independently.

What is the FLSA?

The FLSA is the Fair Labor Standard Act. This labor law ensures employees have the right to a minimum wage and “time-and-a-half” overtime. This is required for all employees who work over 40 hours a week.

There are many factors to wage and hour compliance. These include overtime, timekeeping, recordkeeping and more. A prime example of timekeeping would be California’s law, which states employers can not round down meal breaks. Meal breaks must be no less than 30 minutes.

What is a “workweek?”

According to the FLSA, employers have to establish a workweek. A workweek is defined as 7 consecutive 24-hour periods. If an employee works more than 40 hours a week, they are entitled to overtime. In fact, paying overtime only after 80 hours have been worked in a bi-weekly pay period is illegal. The reason for this is that each workweek is counted independently.

How Important is Labor Law compliance?

Labor law compliance is extremely important. Countless lawsuits have been filed when these laws were violated. In fact, the following are the most successful prosecutions for wage and hour violations. These totals are from 1,000+ claims made by employees who were not given their labor law rights.

As you can see from this information, labor law compliance is critical and not something to be taken lightly. Employers have a duty to adhere to the FLSA. If an employee’s rights are violated, they can make a claim against their employer. It is the responsibility of the employer to be 100% up-to-date with current state and federal labor laws.

What is the FMLA?

The FMLA is the Family and Medical Leave Act. This is an essential law that helps families during challenging times. The Family and Medical Leave Act says that employers must provide job protection and unpaid leave for the purpose of medical challenges or family illness/family reasons. Employees count on this act to protect themselves and their loved ones in times of need.