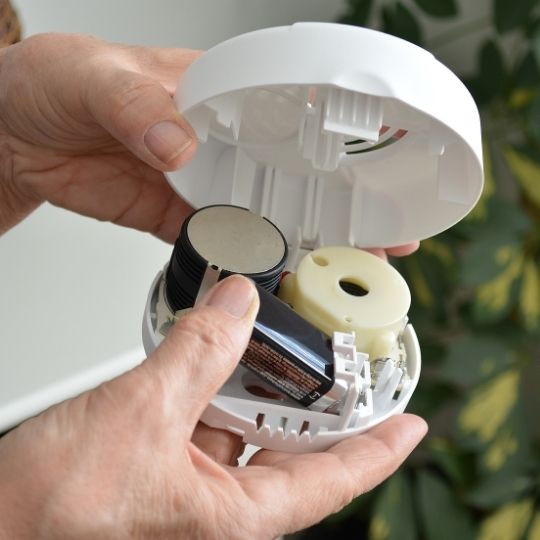 Smoke alarm battery is a vital component in a smoke alarm system. Without it, the smoke alarm simply won’t work since there’s no power source. Smoke alarms come in different brands and models, and battery type will vary per manufacturer and product.

The most common batteries in a smoke alarm include 9V batteries, AA batteries and AAA batteries, with some having a built-in, long-lasting battery that can last for years.

Before you go out and purchase a battery for your smoke alarm it’s best to determine what kind of battery it accepts.

The most common smoke alarm device battery is the 9V for older systems. However, manufacturing has evolved to a point where more efficient batteries, such as double A or triple A are used. It’s worthy to note that double and triple A batteries are rated more efficient, often having double or triple the energy storage of their 9V counterparts.

Then, there are some alarm brands that promise battery life that equals the lifetime of the device. These smoke alarms will usually come with a built-in battery so you won’t have to replace it ever so often.

The nine-volt battery is one of the earliest batteries around and was often used to power transistor radios.

It looks like a pack of chewing gum, albeit with a pair of positive and negative connectors found at the top. Instead of the usual round or cylindrical shape, the 9-volt has a rectangular shape. There are usually 6 individual cells enclosed within.

9V batteries come in alkaline, lithium primary and carbon zinc, promising 550mAh, 1200mAh and 400mAh of capacity, respectively. It’s worthy to note that these batteries are not usually rechargeable (unless specifically stated), so once it’s spent it should be disposed properly.

AA batteries have become the standard size for cylindrical dry cells. They’re arguably the most popular type of batteries around and are used in thousands of everyday devices.

Double A types are characterized by a cigarette-like cylinder shape and will have its positive and negative connections at the top and bottom. AAs can be used in single, double or even up to four in tandem depending on the electronic device.

AAA batteries are pretty much the same as AA batteries, except they’re smaller.

Triple As assume the same cylindrical shape and are used to power smaller devices. The alignment of connectors are similar, as are the chemical compositions. You can easily combine them in two up to four per device and depending on the power needs of the device.

How Many Batteries Do You Need in a Smoke Alarm?

Because of its longevity 9V batteries have been the power source of choice for many smoke alarm manufacturers. However, the most recent models will usually have two or three AA batteries as part of its requirement.

It’s worthy to note, however, that not all smoke alarms run on batteries. Some will have a hardwired setup, which means they will need an electrical outlet to power them. There’s one exception to this- even hardwired alarms will have a backup system, which in this case requires a battery.

A single smoke alarm can have a 9V battery, two or three AAs or several triple A batteries. This largely depends on the size of the smoke alarm, when it was made and manufacturer preference. To determine how many batteries you will need to power a smoke alarm, it’s best to check the packaging or product description if you’re buying it online.

Also, there are smoke alarms that come with sealed batteries. Often called ten-year alarms, these devices usually have lithium batteries that power it for its entire lifetime. The best ones will have end-of-life warnings, or alert the owner to replace the device after the power source is spent.

How Long Do Batteries in Smoke Alarms Last?

Generally speaking, most alkaline batteries will power a smoke alarm for around 12 to 18 months. Lithium-based batteries tend to provide a longer lifespan, as they have a denser chemical composition. If you put in a lithium battery of 9V or AAA (depending on what your smoke alarm needs), then the life tends to extend up to 5 years.

Newer models will offer a sealed battery, which means they don’t need to be removed or replaced once bought. Also, smoke alarm owners can put in lithium-ion rechargeable batteries so they won’t have to purchase new ones when it’s spent.

The actual lifespan of the battery will ultimately depend on several unique factors, including how often the smoke alarm rings or gets activated. Smoke alarms tend to draw less energy while in standby’ mode and more when they’re in alert’ mode. That said, the more the smoke alarm sounds the sooner you’ll have to replace the battery.

It’s recommended to read the product manual so you’ll know what battery types to use. It helps to prevent the smoke alarm from malfunctioning, failing to sound an alert or have a premature lifespan.

What is the Best Battery Brand for a Smoke Alarm?

In order to have a reliable smoke detector you will need to invest in a good brand and long-lasting batteries.

The best battery will depend on the type of battery that’s needed in a smoke detector.

For those that accept 9V, you can get either the Ultralife 10 Year Smoke Detector Battery which contains higher-grade lithium technology, or the Energizer 9V Advanced Lithium Battery. Energizer claims a 5 to 7 year lifespan and is a great option for those hard-to-reach smoke alarms.

You’ll have more choices in the AAA and AA battery type, but generally speaking you will want to get lithium-based ones so you won’t have to replace them every year or so. Brand is a matter of personal preference, but it’s recommended you get Energizer or Duracell, and Eneloop in the rechargeable niche.