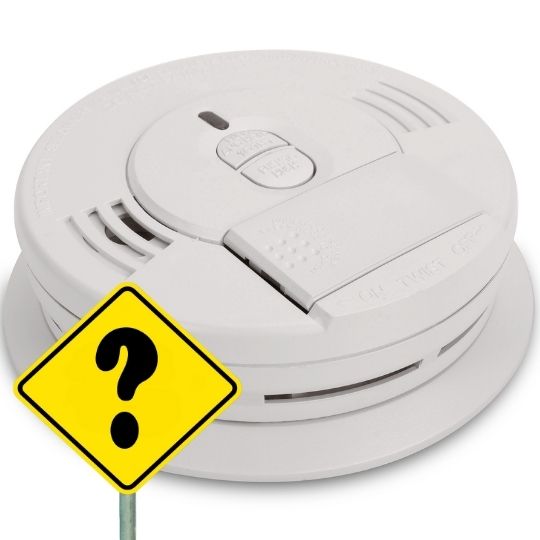 A smoke alarm, often known as a smoke detector, is a necessary device. It detects the occurrence of a fire in a location where it has been installed. As a result, the person in control of the building where the smoke detectors are installed must be familiar with smoke alarms. Updated information and questions concerning the gadget are answered in the FAQ section below.

The battery’s service life is determined by two main aspects. The first is the smoke alarm’s design. The second factor is the environment in which the smoke alarm is maintained. These two parameters are critical in determining the longevity of smoke alarm batteries.

To clarify, the alarm batteries indicated in the user manual fall inside the category of suitable replacement batteries. You don’t have to rely on the battery life promises made by manufacturers. Yes, you will need to replace the battery after your equipment begins to chirp. A chirping sound indicates a low battery alert.

The longevity of batteries also depends upon how frequently the alarms are tested or triggered. A smoke alarm that sounds requires more power than an alarm that waits for an alert. You are advised to use recommended batteries alone to increase longevity.

How to get a smoke alarm to stop chirping and beeping

Endless chirping and beeping from your smoke alarm can drive you crazy indeed. It is suspected that your smoke alarm is not functioning correctly, causing you and your family to be disturbed. How do we approach this problem?

Let’s look at some more causes of chirping.

Your smoke alarm may make chirping and beeping noises for the reasons stated above. As a result, you’ll need to investigate the source of the problem and address it properly. All of the aforementioned difficulties may be avoided if smoke alarms are maintained on a regular basis. As a result, you must take an active role in cleaning the device at regular intervals.

Fyi, environmental factors such as sunlight may be the reason for your annoyance with the device’s chirp sound.

A smoke alarm detects only the presence of fire or smoke and not the presence of carbon monoxide. When it senses smoke or fire, it makes a sound to warn those in the neighborhood to be prepared. As a result, the existence of a smoke alarm in every structure is critical in order to save our lives.

Why smoke alarm keeps going off no reason

Not changing the batteries at regular intervals is one of the reasons why your smoke alarms keep going off. The current flowing through the smoke alarm goes down when the batteries are running low. You will have to change the battery for proper results and if not you could get a false positive.

One of the reasons your smoke detectors continue to go off is because you haven’t changed the batteries at regular intervals. When the batteries run low, the current going through the smoke alarm reduces. You’ll need to replace the battery for good results, and if you don’t, you can receive a false positive.

Because of the volatile organic chemicals in the paints during the treatment in your house, your smoke alarm will also go off. The chemical in the paint may also set off the smoke alarms. The reason for this is the way the sensor is adjusted.

Why my smoke alarm beeping once

Smoke detectors A single beep indicates a low battery or a miswired circuit. Let’s look at the possible causes of your alarm blaring once.

The inclusion of a pull-tab in the smoke alarm device This problem can be resolved by removing the battery’s pull-tab.

Another issue is a low battery. The smoke alarm will chirp, alerting you that the battery needs to be replaced. However, due to limited battery life, no signal is delivered and the device just beeps once.

Terminals and batteries are not in touch with the device. You must determine whether or not the battery obstruction’s pull tab has been removed. The whole impediment must be eliminated.

The person in charge of the building must keep the alarm in good working order by preventing battery-draining concerns.

As a result, resetting the battery or removing one of the batteries is required to stop your alarm from beeping. The backup battery that comes with a hardwired device is always the culprit.

If your smoke alarm is battery-powered, you can presume that it is chirping for another cause. If the hardwired unit starts chirping and beeping, it means the fault is with the battery or the unit itself. What is the true cause of the beeping? The major cause is that the battery has been operational for a long period. The chirp, on the other hand, begins when the batteries run out of charge.

When a battery-only smoke alarm beeps without a battery, it is obvious that the battery drawer is entirely closed. As time passes, the chirping sound becomes louder and louder as the smoke alarm weakens.

Is your first-alert smoke alarm set to beep three times before it shuts down? Yes, it beeps three times, then stops for a brief period of time before beeping three times more. If this is the case, it might be an indicator of smoking in your home or room. You can also deduce that the smoke alarm beeps due to dust and filth. Another cause of your alarm beeping might be steam after a hot shower.

Another explanation for the constant three or four beeps followed by a break is the presence of carbon monoxide. As a result, you must leave the house quickly. The smoke alarm warning signs can be used to notify the fire service.

If, on the other hand, your smoke alarm sounds every few minutes, this is a clear indicator that the device’s battery is going low. If you hear the smoke alarm blaring for no apparent reason, the batteries are most likely dead and should be replaced. If everything is well but the alarm continues to beep, it is time to replace it without hesitation. The smoke may have gotten outdated, causing it to function in an erratic manner.

The red light on your smoke detector blinks every 10 seconds. This demonstrates that it has been temporarily insensitive to the aftereffects of smoking. When there is no longer a considerable amount of smoke in the air, the smoke detector’s alert should be turned off and the red light should begin blinking. However, if the smoke alarm detects smoke again, it automatically resets for warning emission. You may also manually set the alarm to reset the smoke device and make the red light flash.

However, if the smoke alarm detects smoke again, it automatically resets for warning emission. You may also manually set the alarm to reset the smoke device and make the red light flash.

If your smoke alarm starts blinking red, don’t freak out. It’s a wonderful indicator of your swift action, as specified by the manufacturer. Yes, the alarms may need to be serviced, replaced, or maintained. As a result, the red light flashing is an indicator.

What is the solution to the aforementioned problem? The chirping noise may be stopped immediately by manually resetting the smoke alarm. in order to resolve the processor’s error If your smoke alarm beeps after a battery change, you may also attempt the troubleshooting methods listed below.

If there is any leftover residue charge, push the test button on the alarm to discharge it. After cleaning the item with a microfiber cloth, replace the battery. Now, re-test the alarm by hitting the test button. Long pressing confirms the device’s appropriate condition with its noisy test sequence.

Kidde smoke alarm goes off for no reason

If the Kidde smoke alarm goes off for no reason first check the device if hardwired or not. Hard resetting the device and battery replacement are other must steps to fix the issue. Replacing the batteries and cleaning the unit are inevitable steps to overcome the repair.

Some of the reasons are listed below.

You can follow the above solutions to fix the problem of kidde smoke alarm go off for no reason.